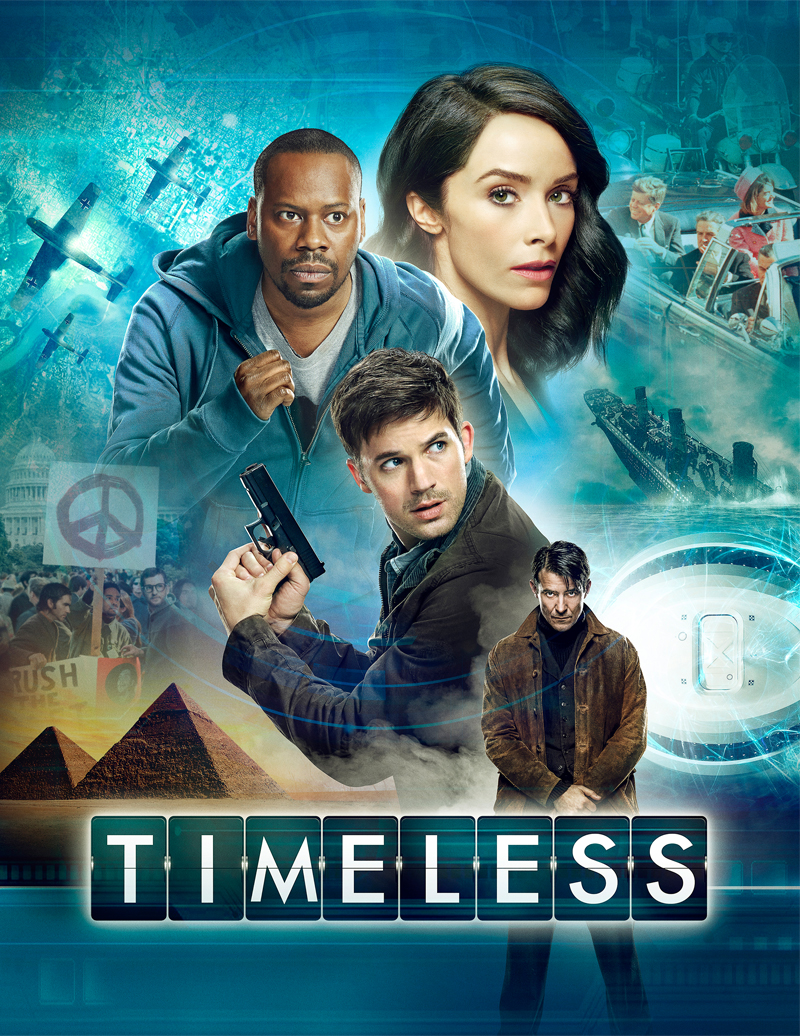 Fall is my favorite season for must-see TV shows. The weather starts getting cooler and all you want to do is cuddle up on the couch in a warm blanket, with a cup of tea, and tune into every new Fall series! I’m always on the lookout for new shows to get into, especially dramas, so I was excited to check out Timeless on NBC.

In case you haven’t seen the previews, here’s a little bit about the show:
From Eric Kripke (“Revolution,” “Supernatural”), Shawn Ryan (“The Shield”) and the producers of “The Blacklist” comes this thrilling action-adventure series in which a mysterious criminal steals a secret state-of-the-art time machine, intent on destroying America as we know it by changing the past. Our only hope is an unexpected team: a scientist, a soldier and a history professor who use the machine’s prototype to travel back in time to critical events. While they must make every effort not to affect the past themselves, they must also stay one step ahead of this dangerous fugitive. Can this handpicked team uncover the mystery behind it all and end his destruction before it’s too late?

The cast includes Abigail Spencer, Matt Lanter, Malcolm Barrett, Goran Visnjic, Paterson Joseph, Sakina Jaffrey, and Claudia Doumit. And this morning, I had the opportunity to chat with Abigail Spencer, who plays Lucy Preston, while she was in NYC promoting the show. I got the opportunity to get her thoughts on the show, her character, and what she would change if she could go back in time. Here’s a little bit from our chat:

What really drew you to this role and wanting to bring Lucy Preston to life?
Well I had a little bit of an opposite reaction. I’ve been on Rectified for the past four years and we shoot in Georgia so I’ve been on the road quite a bit, and going back and forth between LA where my son goes to school and we live, and then traveling. And also just not sure if I wanted to do another television show. It’s a huge commitment and you really have to potentially sign up and be invested in playing this person and surrounding yourself with this world for a very, very long time.

I had a little bit of a Lucy reaction. When they were like “Lucy Preston, come with us, time travel is real,” she’s like “No it’s not – bye everybody.” I kinda had a very similar reaction – I read it and I was like “No way, I’m not doing that! That’s crazy – time travel?! No.” And I think that was the right quality that was needed to play Lucy authentically. I said to my agents, “Let’s meet with with Eric Kripke and Shawn Ryan, and then, meeting them, they were so lovely, they love their wives, they have kids, and you know, those were things that were really important to me. I found them to have incredible humanity.

And this was the kicker – five other wonderful actresses that I’ve known for a very long time – they received the script to audition. And when they read it, they all reached out to me and said “I just read this pilot – you HAVE to play the part of Lucy – it was written for you!”

Also, there’s something about when you’re living in someone’s shadow – how do you get out from underneath that and really follow your own calling? And I think that’s where we meet Lucy. There’s something about the opportunity to time travel and do something so far away from the thing that she’s really been pursuing which is just being another version of her mother, that I think really helps her find her sense of purpose.

And I think what you’ll find as you continue to watch the show is that some of the mystery around it is like “who is Lucy Preston and why was she chosen for this mission?” So, on a deeper level, I feel like I found a woman who is coming into her own.

When you’re getting into character, do you have a special routine that helps you transition?
I’m very fortunate that on our show, the costumes hair and makeup really help a lot. I have the very good fortune of going back in time every week. Our costumes are authentic. The costume designer’s dedication to the history and authenticity in the costuming is one of my favorite parts of playing the role. My mom made all my clothes growing up so I have a fascination with the history of wardrobe and clothing and I think it kind of has its own story within itself. As Lucy is going back in time, hair and makeup is part of her preparation for going back in time.

If there was one historical event that you could go back and change, what would it be?
Besides Eve eating the apple in the garden of Eden – I’m just like “What would have happened if you go back…so, the serpent is Satan, Eve, and you should not listen to him.”

There’s fun things I’d love to be a part of, but I’m very curious because of the year that we’re in and the climate that we’re in. You know, part of history is if we really wanna change our future, we have to know where we came from, so we don’t keep making the same mistakes. I think that’s what’s been so interesting about looking back. And I’m very curious about the way our country was founded. Obviously, I think there’s a lot of great things, but there’s a lot of things we’re still feeling the repercussions of.

Special thanks to Abigail Spencer for taking the time to chat with What’s Haute! “Timeless” airs Mondays 10/9c on NBC.

Tonight’s episode, “The Assassination of Abraham Lincoln,” airs at 10/9c. A quick synopsis:
Lucy (Abigail Spencer), Wyatt (Matt Lanter), and Rufus (Malcolm Barrett) chase terrorist Garcia Flynn (Goran Višnjić) to the night of Lincoln’s assassination, where they’re horrified to learn that Flynn’s linked up with history’s most notorious assassin, John Wilkes Booth (guest star Kelly Blatz). Putting aside a tragedy of her own, Lucy speculates that Flynn intends to send the fragile nation into chaos by making a bad thing worse, and a debate rages among the team: should they alter history if it means changing it for the better? Also starring Paterson Joseph, Sakina Jaffrey and Claudia Doumit. Guest starring Neal Bledsoe, Michael Krebs, Terry Lewis and Lucia Frangione.

This post was sponsored by the Role Mommy Writer’s Network.