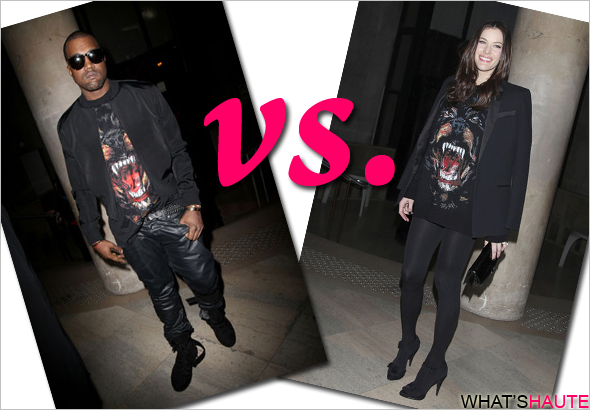 Of course celebs shop at the same places and are often caught wearing the same outfit, different ways, but we’ve never seen a man and a woman appear on our “Who Rocked It Hotter” feature. Kanye West and Liv Tyler showed up to the Givenchy ready-to-wear fashion show during Paris Fashion Week both dressed in Givenchy, naturally, but ironically wore the same exact sweater!

The item they were spotted both wearing was a shirt from the Givenchy Fall 2010 collection, emblazoned with an image of a rabid-looking Rottweiler dog. (Givenchy designer Riccardo Tisci previously wore the shirt on the runway as well.) But back to Kanye and Liv. The rapper paired the top with a black leather jacket and pants, Ann Demeulemeester high-top sneakers and dark sunglasses, of course. Actress Liv wore her shirt as a dress, with black tights, peep-toe sandals and a black Givenchy blazer.

It likely never crossed their minds – or anyone else’s – that they’d show up to the same show, wearing the same shirt! But since this is our first male/female pairing, is it fair to ask who rocked it hotter?

Who do you think wore it better? Kanye West or Liv Tyler?