The contest is now closed. Congratulations to Deine K! She is the winner of the $250 shopping spree from beso.com. Thanks to all who entered and stay tuned to What’s Haute Magazine for more contests and giveaways. 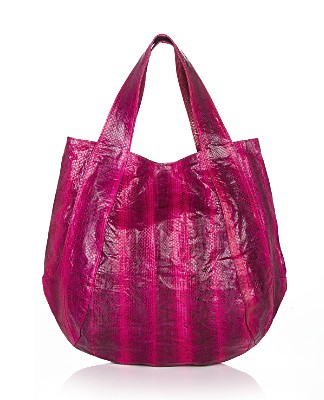 Between my handbag blog, handbag column on Examiner, and ‘Bag It’ segments for Beso.com, you all know of my deep love for bags. And you know that I’ve already got a list of bags to buy for the summer. At the top of the list is the Beirn Jenna Watersnake Tote (available on beso). If you don’t already own a Beirn bag, you should. I already own this bag in cream, and I absolutely love it. It’s a lightweight exotic bag that is chic, affordable and super functional. And in this eye-popping pink snake, you can’t go wrong with it for the summer.

I’m thrilled to partner with Beso to give one of you lucky readers the chance to win a $250 shopping spree towards YOUR favorite handbag (like the Beirn) from your favorite store on beso! Summer is coming fast and while a great pair of sandals, sunglasses or sundress are nice, a statement-making bag can make your entire look! Want the chance to win and to get an early start on your summer purse shopping? One lucky reader will win a $250 shopping spree courtesy of beso. To enter:

About Beso
Beso is a search engine for fashion lovers. It brings together all the best in fashion – from your favorite stores and brands – into one easy place to shop! Beso allows you to search for women and men, home goods, accessories, beauty products and of course, handbags!