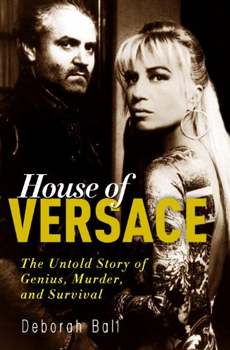 He was one of the most prolific designers of our time, known for his incredibly opulent and flashy collections, and his strong, loyal celebrity following. Equally loved and criticized, Gianni Versace, the Versace label, and the man behind it, stayed on the fashion radar. But behind all of the glitz and glam was a lot more. House of Versace: The Untold Story of Genius, Murder, and Survival, by Deborah Ball, delves into the storied life of the designer, his family, and his rise to fame. Ball, a former Milan correspondent for The Wall Street Journal, conducted interviews with Versace’s family members, lovers, business rivals, fashion models and industry icons.

Want the book? We’re giving away five copies! To enter to win, leave a comment below telling us your favorite Versace memory. And for more entries, Join our Facebook group, become a fan, or follow us on Twitter. Contest ends February 28, 2010 at 11:59 pm EST.

Versace. The very name conjures up images of outrageous glamour and bold sexuality, opulence and daring. All of course true, but only half the story. Versace is also the legacy of a great creative genius from a poor, backward part of southern Italy who transformed the fashion world through his intuitive understanding of both women and how a changing culture influenced the way they wanted to dress. The first book in English about the legendary designer, House of Versace shows how Gianni Versace, with his flamboyant sister Donatella at his side, combined his virtuosic talent and extraordinary ambition to almost single-handedly create the celebrity culture we take for granted today.

Gianni Versace was at the height of his creative powers when he was murdered in Miami Beach. The story was front page news around the world and the manhunt for his killer a media obsession. His beloved sister Donatella demanded no less than a funeral befitting an assassinated head-of-state to be held in Milan’s magnificent cathedral. In what was the ultimate fashion show, the world’s rich and beautiful – Princess Dianna, Elton John, Carla Bruni, Naomi Campbell, Carolyn Bessette-Kennedy, Anna Wintour and others – gathered to mourn a man already considered one of fashion’s great pioneers.

Deborah Ball vividly recounts the behind-the scenes struggles – both creative and business – of Donatella as she stepped out of her brother’s long shadow and took control of the House of Versace. The book offers the first inside look at the enormous challenges Donatella faced in living up to Gianni’s genius, her struggle with a drug habit, her battles with her brother Santo and the mystery of why Gianni left control of his house to Donatella’s young daughter, Allegra.

House of Versace is a compelling, highly readable tale of rise from obscurity, a painful fall and ultimate redemption as the Versace empire returned to health – for now.

Special thanks to Crown Publishing Group (a division of Random House) for hosting this giveaway!