There are three things that I just can’t get enough of. Shopping is one of them. Chocolate is another. The third? Well, let’s just leave that up to the imagination… But back to chocolate…I’m an absolute chocoholic so it’s the ultimate in guilty pleasures for me, though not necessarily the best dietary option. Especially if you’re on a diet, although there are all sorts of diet-friendly chocolate products on the market to satisfy those cravings, including low-fat chocolate cakes and sugar-free chocolate candies, along with chocolate-flavored appetite-curbing drinks and supplements. But did you ever think you could inhale chocolate to get your low-fat fix? A new product called Le Whif offers a revolutionary new way to have your proverbial (chocolate) cake, without actually eating it. And without the calories too. What looks like a colorful asthma inhaler is actually a chocolate-sniffing apparatus priced at €9.95 each, that comes in four flavors: mint chocolate, raspberry chocolate, mango chocolate, and plain chocolate.

Harvard professor David Edwards, lead inventor of Le Whif, says:
“Over the centuries we’ve been eating smaller and smaller quantities at shorter and shorter intervals. It seemed to us that eating was tending toward breathing, so, with a mix of culinary art and aerosol science, we’ve helped move eating habits to their logical conclusion. We call it whiffing.”

Edwards went on to say that inhaled chocolate is just the start – he and his team at Foodlab at Le Laboratoire in Paris are also developing other “culinary innovations that let you eat while breathing.” So you can skip the candy bar and have a whiff of chocolate.

What do you think of Le Whif? Would you have a puff or two? 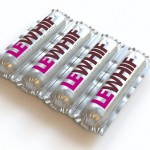