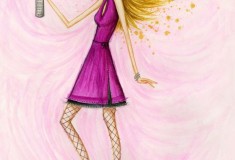 Atelier Versace designs tour costumes for Beyonce. The custom-made looks were for the European leg of her Mrs. Carter World Tour, and included a white-and-silver embroidered bustier mini dress and a mesh, short cutaway mini dress. (Harper’s BAZAAR Magazine) Image via Versace Isabel Marant is sick of wearing her own wedge sneakers because she’s sick […] END_OF_DOCUMENT_TOKEN_TO_BE_REPLACED 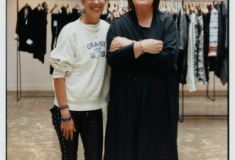 Parisian fashion designer (and unofficial queen of the wedge sneaker) Isabel Marant is bringing her French style to the masses! A spokeswoman for H&M announced that Isabel Marant will design a collection for women, men and children/teens as part of her new role as guest designer for Hennes & Mauritz. The women’s and men’s line […] END_OF_DOCUMENT_TOKEN_TO_BE_REPLACED 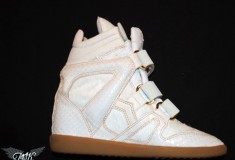 This is the year of Beyoncé. She sang at the Presidential Inauguration, announced a mega deal with Pepsi, performed at the Superbowl, announced her “Mrs. Carter World Tour“, produced the “Beyoncé: Life Is But A Dream” documentary and pretty much dominated the world. Now the megastar has her own luxury sneaker. Naturally. It’s no secret that Beyonce’s […] END_OF_DOCUMENT_TOKEN_TO_BE_REPLACED 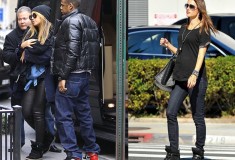 When we spotted some of our favorite fashion-forward icons are rocking the same trend, we took notice!  Beyonce, Alessandra Ambrosio, Alicia Keys and Tracee Ellis Ross have all been spotted wearing Isabel Marant’s Wedge Sneaker. And occasionally, we too like to trade in our five-inch platform pumps for a pair of chic sneakers. We love that […] END_OF_DOCUMENT_TOKEN_TO_BE_REPLACED