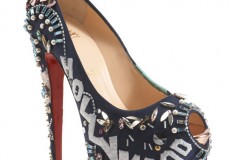 Christian Louboutin has been in the news a lot lately, mainly due to his lawsuit against YSL over red-soled shoes. But now he’s in the spotlight again – for his very limited-edition, very expensive shoe. We recently told you that Mssr. Louboutin was celebrating his 20th anniversary of designing shoes by unveiling a new design […] END_OF_DOCUMENT_TOKEN_TO_BE_REPLACED